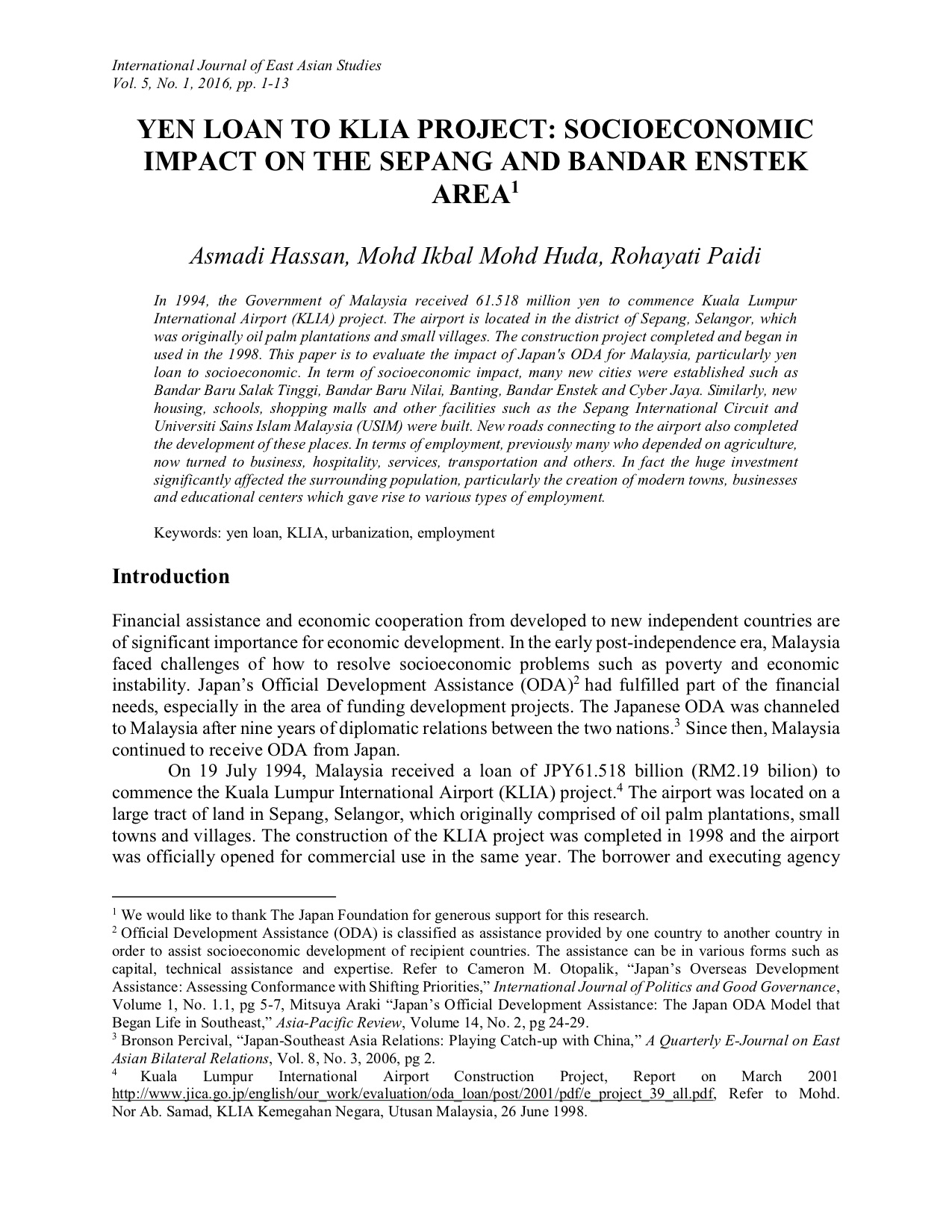 
In 1994, the Government of Malaysia received 61.518 million yen to commence the Kuala Lumpur International Airport (KLIA) project. The airport is located in the district of Sepang, Selangor, which was originally oil palm plantations and small villages. The construction project completed and began in used in 1998. This paper is to evaluate the impact of Japan's ODA for Malaysia, particularly yen loan to socioeconomic. In term of socioeconomic impact, many new cities were established such as Bandar Baru Salak Tinggi, Bandar Baru Nilai, Banting, Bandar Enstek and Cyber Jaya. Similarly, new housing, schools, shopping malls and other facilities such as the Sepang International Circuit and Universiti Sains Islam Malaysia (USIM) were built. New roads connecting to the airport also completed the development of these places. In terms of employment, previously many who depended on agriculture now turned to business, hospitality, services, transportation and others. In fact, the huge investment significantly affected the surrounding population, particularly the creation of modern towns, businesses and educational centres which gave rise to various types of employment.

Submission of a manuscript to the WILAYAH implies that the submitted work has not been published before (except as part of a thesis or report or abstract), that it is not under consideration for publication elsewhere; that all co-authors have approved its publication. The WILAYAH : International Journal of East Asian Studies adopts CC BY license. As such, we would be grateful if an acknowledgement accompanies the republication that the work was originally published in WILAYAH. The editors will ensure digital preservation of access to the journal content by the Journal depository section.

Although the Department of East Asian Studies is the publisher of the WILAYAH : International Journal of East Asian Studies, the views presented in the WILAYAH are entirely those of the contributors and do not reflect the official stand of the Department of East Asian Studies. The Department does not hold itself responsible for the accuracy of any article published. Publisher and co-publishers assume no responsibility, nor by the editors for any injury and/or damage to persons or property as a result of any actual or alleged libellous statements, infringement of intellectual property or privacy rights, or products liability, whether resulting from negligence or otherwise, or from any use or operation of any ideas, instructions, procedures, products or methods contained in the material therein.