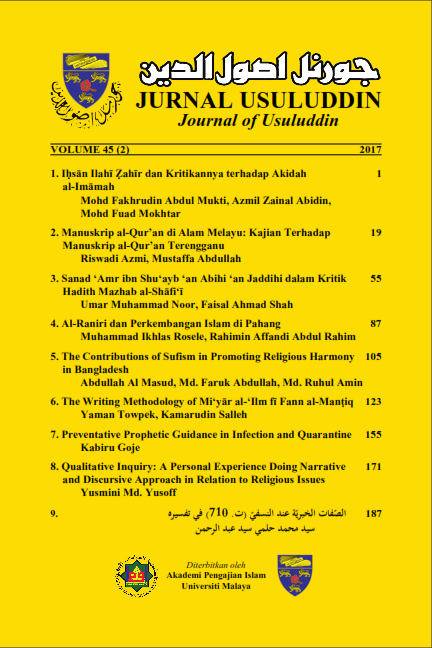 The article discusses the thought of al-Nasafī al-Māturidī on al-sifat al-khabariyyah which are the words of anthropomorphism such as hand, face, eye, calf, al-istiwa’ and al-ityān and ect., whether is it categorized as al-muhkam or al-mutashabih. Those attributes has been extensively debated from time to time. The article concludes that Imam al-Nasafi in understanding al-sifāt al-khabariyyah has his own stance similar to the previous scholars of al-Māturidiyyah and al-Asha‘irah against the opposite point of view as al-Mujassimah and al-Hashawiyyah and those who follow their thought. Al-Nasafi believed that he should follow the path of al-ta’wil in the understanding of al-sifat al-khabariyyah to purify Allah from having the likeness and similarity of the beings in accordance to al-muhkam of Quranic verses. There is nothing like unto Him, and He is the Hearing, the Seeing. Surah al-Shūrā 42:1. He has pointed out the verses which in the sense show a similarity between Allah and the beings with other meanings that are appropriate and worthy to Allah. And he did not turn away the utterances of anthropomorphism as said by the al-mubtadi‘ah, but he turned them away because of their impossible attributes to Allah – purifying Allah from time, space and body- also by rejecting the utterances and sentences as can be found in the Arabic language by denying the affliction terms, and refuted all improper utterances, or which gives misconceptions of Allah. At the same time, he does not deny their meaning that Allah himself wants.