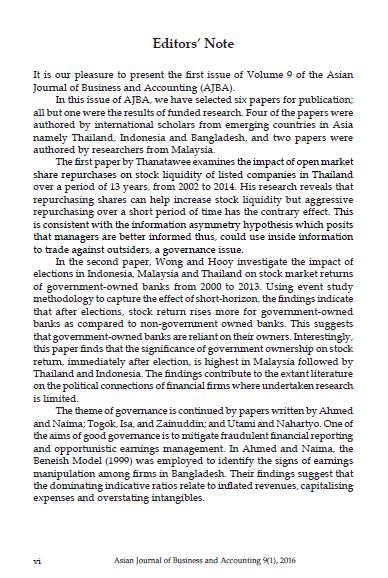 It is our pleasure to present the first issue of Volume 9 of the Asian
Journal of Business and Accounting (AJBA).
In this issue of AJBA, we have selected six papers for publication;
all but one were the results of funded research. Four of the papers were
authored by international scholars from emerging countries in Asia
namely Thailand, Indonesia and Bangladesh, and two papers were
authored by researchers from Malaysia.
The first paper by Thanatawee examines the impact of open market
share repurchases on stock liquidity of listed companies in Thailand
over a period of 13 years, from 2002 to 2014. His research reveals that
repurchasing shares can help increase stock liquidity but aggressive
repurchasing over a short period of time has the contrary effect. This
is consistent with the information asymmetry hypothesis which posits
that managers are better informed thus, could use inside information
to trade against outsiders, a governance issue.
In the second paper, Wong and Hooy investigate the impact of
elections in Indonesia, Malaysia and Thailand on stock market returns
of government-owned banks from 2000 to 2013. Using event study
methodology to capture the effect of short-horizon, the findings indicate
that after elections, stock return rises more for government-owned
banks as compared to non-government owned banks. This suggests
that government-owned banks are reliant on their owners. Interestingly,
this paper finds that the significance of government ownership on stock
return, immediately after election, is highest in Malaysia followed by
Thailand and Indonesia. The findings contribute to the extant literature
on the political connections of financial firms where undertaken research
is limited.
The theme of governance is continued by papers written by Ahmed
and Naima; Togok, Isa, and Zainuddin; and Utami and Nahartyo. One of
the aims of good governance is to mitigate fraudulent financial reporting
and opportunistic earnings management. In Ahmed and Naima, the
Beneish Model (1999) was employed to identify the signs of earnings
manipulation among firms in Bangladesh. Their findings suggest that
the dominating indicative ratios relate to inflated revenues, capitalising
expenses and overstating intangibles.