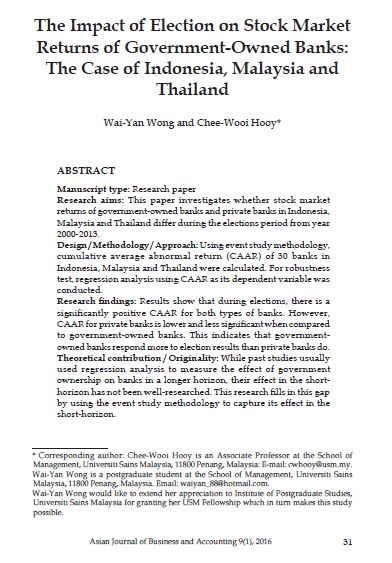 Manuscript type: Research paper
Research aims: This paper investigates whether stock market
returns of government-owned banks and private banks in Indonesia,
Malaysia and Thailand differ during the elections period from year
2000-2013.
Design / Methodology / Approach: Using event study methodology,
cumulative average abnormal return (CAAR) of 30 banks in
Indonesia, Malaysia and Thailand were calculated. For robustness
test, regression analysis using CAAR as its dependent variable was
conducted.
Research findings: Results show that during elections, there is a
significantly positive CAAR for both types of banks. However,
CAAR for private banks is lower and less significant when compared
to government-owned banks. This indicates that governmentowned
banks respond more to election results than private banks do.
Theoretical contribution / Originality: While past studies usually
used regression analysis to measure the effect of government
ownership on banks in a longer horizon, their effect in the shorthorizon
has not been well-researched. This research fills in this gap
by using the event study methodology to capture its effect in the
short-horizon.

Practitioner/ Policy implications: The result of this study will
benefit investors as it may help them better understand and evaluate
the political impact on the banking industry during an election.
Research limitation/Implications: Firstly, survivorship bias
analysis cannot be conducted due to the lack of information on
inactive stocks. Secondly, this study could not run a separate
analysis for each country as there was a total sample of only 30 firms
which is the minimum requirement for a reliable statistical analysis.
Keywords: Election, Event Study, Firm Performance, Government-
Owned Banks
JEL Classification: G11, G14, G21