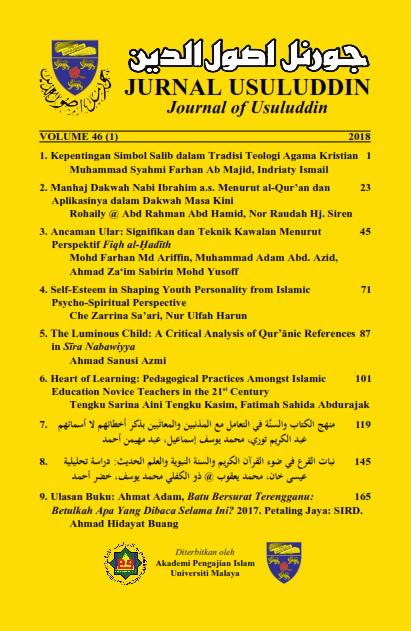 Early childhood experiences profoundly affect later functioning as an adult. These experiences also involve the development of self-concept that has close relation to the Arabic term muru’ah or self-esteem in Islamic literature. Many scholars have proposed theories and models of self, including those based on Islamic teachings. This article aims to explore the concept of self-esteem in shaping youth personality based on the Islamic psycho-spiritual study using the method of content analysis. The self-esteem is regarded as a risk factor influencing social functioning and problem behaviour in youth contributing to different kind of mental health problems. There is also a link between the self-esteem and social behaviour which relate to the whole problem of personality disorder. A high self-esteem was found to be the most important factor for adjustment and for protection against common problem behaviour among youth. Whilst, low self-esteem has a direct effect on problem behaviour. In Islamic psycho-spiritual discipline, the sources of self-esteem are based on revelations of God without neglecting the empirical aspect of it as practised by psychologists. Thus, in shaping youth personality, self-esteem in Islam placed an equilibrium line between physical, psychological, spiritual and religious development. At the same time, sources of self-esteem also take into consideration in the collection of self-perceptions from social, physical, emotional, family, behavioural, academic, and the environment interaction outcomes like parents, family, teachers, friends and community members which do not contradict the teachings of Islam. Thus, through the conception of self-esteem build in Islamic psycho-spiritual discipline that combines sources from revelation of God and empirical of human beings’ efforts, the benefits can be seen not only in the temporal aspect of one’s life but also in the eternal.