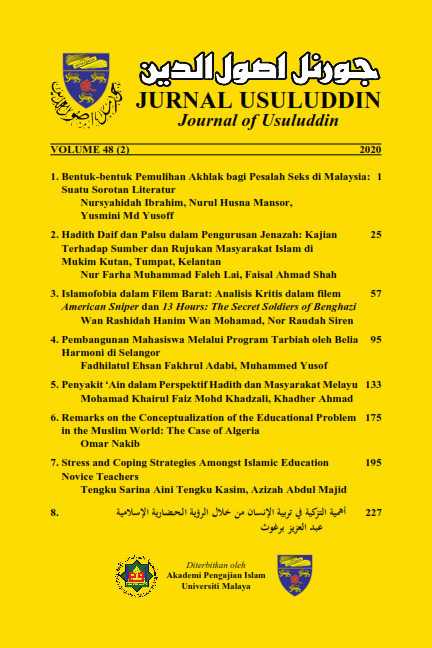 Evil eye had been described in several hadiths which show its existence and its harmful effects on humans. The Malay community in particular mention the disease 'ain refers to several other names such as “keteguran”, contact with eyes, hypnotic, magic potion, eye bolts and so on. Through the method of inductive and descriptive analysis, this article aims to collect hadiths from al-Kutub al-Sittah that related to evil eye and provide explanations of fiqh al-ḥadīth-based through the book of explanations of hadith. Then, the discussions associated with the practice in the Malay community-related to evil eye. The findings show that among the 11 major hadiths of al-Kutub al-Sittah are related to evil eye which can be divided into four main areas, namely; Firstly: the resolution of the messenger of allah on the presence and effect of evil eye. Secondly: bath treatment for the patient affected by evil eye with the remaining’s of a specific ablution done by the evil eye perpetrator. Thirdly: treatment of evil eye through ruqyah practice. Forthly: ​​protection against evil eye through ta‘awwuz (request for protection). But, in the community there are distinctive treatment and prevention methods compared to what is described in the discussion from fiqh al-hadith. In conclusion, evil eye is a condition that affects harm and has a specific treatment approach to its victim as explained by the Prophet.