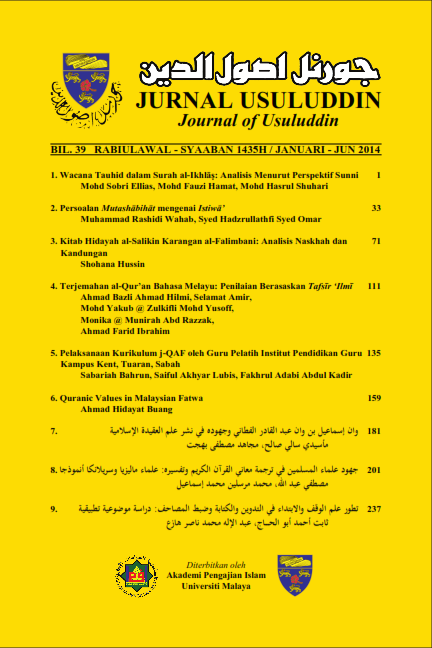 In Malaysia an official fatwa must be based on the opinion of the Shafi‘i school of law, as required by the State Enactments and administrative convention. The reasons behind this are basically historical and social and to certain extend political. As the Malaysian society especially the Muslim has progressively developed into a more open minded and civilized society stimulated by the process of globalisation and modern education, reference to the Shafi‘i school in matter of fatwa is sometimes abandoned by the Muftis. The evidence of this can be seen in many of the fatwa issued by the Mufti in Malaysia. It is therefore opportune to see and analyse what are the reasons and factors for this change. As Quran is the main source of law in Islam the analysis of the above fatwa is made with respect to the legal values that are provided in the Quran. It is also served as a benchmark or controlling variable in the analysis. The data on the fatwa at hand are collected up to the year 2000. The paper contains three parts: (1) elaboration on the meaning of the Quranic values in respect of Islamic law (2) elaboration on the system of fatwa in Malaysia and (3) analysis on the selected fatwa issued in Malaysia in respect of the Quranic values