Editorial Note
Issues pertaining to constitutionalism figure prominently in this issue of the JMCL. Conversations on the Federal Constitution and public law continues to rumble as the ‘New Malaysia’ grapples with the rule of law and the need to return to the basic tenets of its basic document.

In the Fifth Raja Aziz Addruse Memorial Lecture Professor Shad Saleem Faruqi historically examines the constitutional and legal safeguards as well as critical cases which have had an impact on Judicial independence and impartiality. Noting that the ‘judicial winter’ which descended in 1988 had not yet fully thawed, Professor Shad highlights several recent positive developments which seem to point towards strengthening constitutionalism, such as the revival of the basic structure doctrine and a more prismatic interpretation of the Constitution by the courts. These, coupled with strong developments in Administrative law augur well for Public law and its future, in Malaysia.

Low Hong Ping follows this up with an interesting and important analysis of the ‘soul’ of the Constitution or its basic identity through an examination of provisions pertaining to how easy or difficult it would be to amend provisions of a constitution. While noting that finally Malaysia has unequivocally adopted the basic structure doctrine, the author argues that this could be the first step towards realising the identity of the Malaysian Constitution, that is, through its ‘core’ or basic structure.
Khairul Anwar and Saifullah Qamar meanwhile analysed the development of the right to privacy in Malaysia through the Court of Appeal decision in Muhamad Juzaili bin Mohd Khamis v State Government of Negeri Sembilan. The authors argue that the Court of Appeal decision adopted and cemented a constitutional right to privacy although the decision was reversed by the Federal Court on appeal. Nevertheless, the authors argued for the continued use (given its relevance) of the Court of Appeal decision and suggested that the Federal Court could have been in error in reaching its decision. The case concerned the right of the appellants, Muslim men, who were diagnosed with Gender Identity Disorder, to wear women’s attire, an issue which had been settled in India by at least two Supreme Court cases, one of which was a point of reference for the Court of Appeal decision. 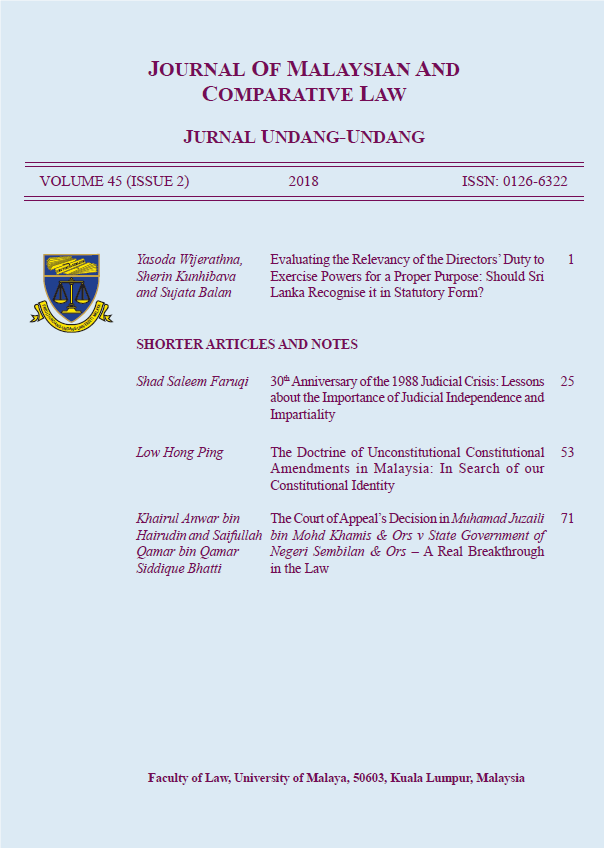