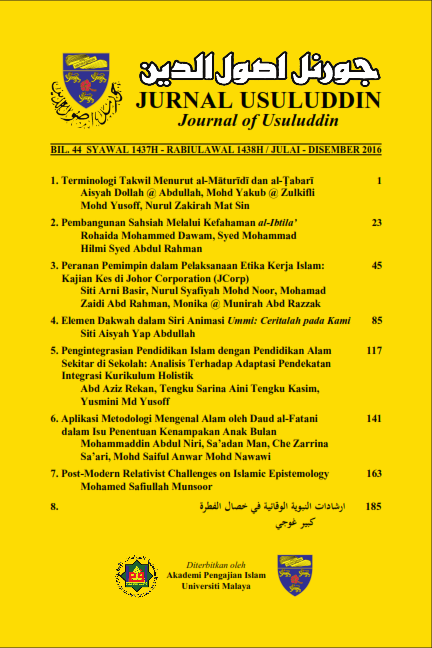 
With the emergence of the quantum world and the emerging weaknesses of the positivistic notion of science, post-modernism relativism emerged taking the world view that we constructed our own social reality. Thus, there are no such things as objectivity and truth. This amongst other things paved the way for secularism especially within the Western world, where its philosophy has been incorporated both in its education system and its multi-media, which has invariably impacted the Muslim world. The methodology entailed examining relevant Sociological text, as well as selected Islamic traditional literature including the creed of Taftanzanī, Al-Ghazālī, Ibn Ḥazm amongst others and inter-linking it with Qur’an and Prophetic hadiths. Post-modernism poses a challenge to Islam by way of trying to incorporate alternative narratives into its institutional structures. The solution to overcome this is by inculcating greater awareness amongst the Muslims, as well as properly understanding and disseminating the nature of knowledge of Islam in its multi-dimensional forms. Islam integrates the sacred and the profane, with accent on this world (dunyā) - next world (akhira). It is thus more holistic and profound, subsuming both the rational and non-rational elements, as well as giving life a definite meaning and direction.