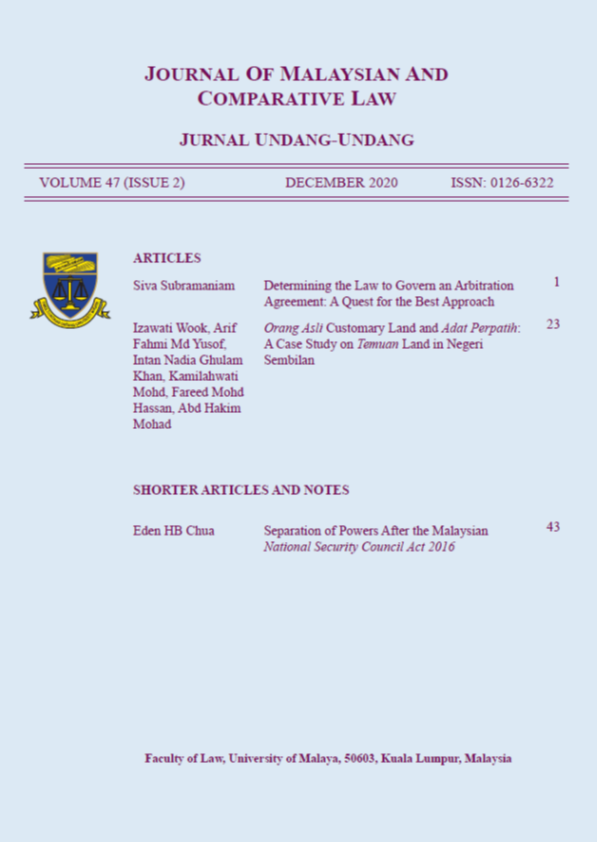 The December 2020 edition kicks off with the piece by Siva Subramaniam entitled, ‘Determining the Law to Govern an Arbitration Agreement: A Quest for the Best Approach’. In this article, the author analyses the complexities surrounding the determination of the parties’ choice of law in relation to an international commercial arbitration. This is especially so because the arbitration agreement is separate from the main contract, and the arbitration agreement could be governed either by the law of the underlying contract or the law of the seat of the arbitration.
In ‘Orang Asli Customary Land and Adat Perpatih: A Case Study on Temuan Land in Negeri Sembilan’, Izawati Wook and others delve into the customs and customary law of the Temuan community in Negeri Sembilan. The authors adopt a qualitative approach through interviews and focus group discussions to investigate the concept, meaning and perspectives of customary land among the Orang Asli in several selected villages in Negeri Sembilan.
Last but not least, Eden HB Chua analyses the Federal Court decision in Datuk Seri Anwar Ibrahim v Government of Malaysia [2020] 3 CLJ 593, focusing on the Federal Court’s refusal to rule against the constitutionality of the National Security Council Act 2016.